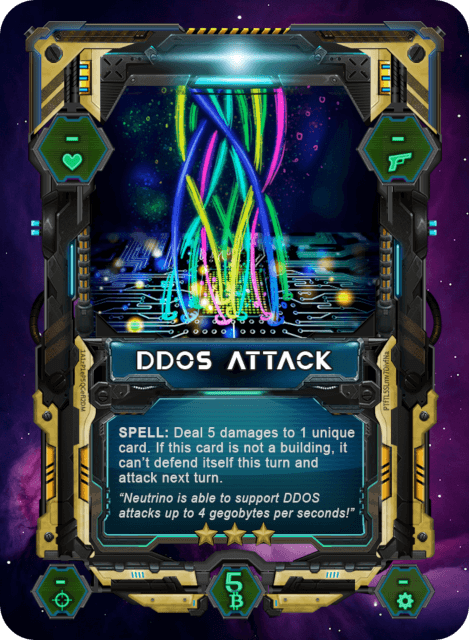 The DDos attack is a very powerful attack. It comes from everywhere and target a single enemy, dealing him awesome damage!

Reduce the frequency of the antibot check. - 1.00% per level!

The DDoS attack is a very powerful attack. It comes from everywhere and targets a single enemy, dealing him awesome damage!

The DDoS Attacks were usually performed by hackers all across the Globe but a group of skilled scientists, nerds and hackers created a new ICQ channel where they planned to bring life to THE DDoS attack that they were creating on GitHub.

Not only artificial intelligence but speech detection, thermal sensors, infrared port, even humidity sensors. They also equipped him with the ability to use blockchain power and cryptos to rapidly diversify the attacks to kill you faster, because the moment you thought it was killed, he is already creating botnets to capture your attention.

If you spot the DDoS attack, run, just run and never look back.

Disney movie memorization, dreamwalker and being able to differentiate between coriander and parsley.

Garlicoin (GRLC). Forked from LTC as a joke, it even got the meme of the Garleks… funny coin. This is the coin you never thought you needed, and you probably don't.

“We shall strike again!”

A Distributed Denial of Service Attack, or DDoS attack, is a very malicious way to disrupt traffic on a targeted server. a network or any other connected service by overwhelming all their systems and infrastructure with a very high flood of internet traffic. This causes targeted websites to be temporarily down, just like a traffic jam but 10,000 times more cars; the highway will be clogged trying to let through all the cars when the usual traffic is about 50-100 cars.

Attackers have to create botnets, or a network of bots, meaning they need to either hack or infect with malware different computers or devices and take control of them. Since the attacker gets hold of different “real” devices, the attack won’t be easily detected as a single IP address attack but rather a complex net of bots being remote controlled.

The DDoS attack then sends directed commands to the botnet so they start creating a high flood of traffic to the targeted site, causing the system to get a Denial of Service. They use different vectors to target varying parts of the network.

Since the requests are originated by a valid device, it is usually difficult to understand and differentiate between real traffic and attacks but usually there are some systems that help you both prevent and mitigate any existing attack to the systems or websites.