Mega jackpot start as 10000 Satoshi and grows each time a mission claim is done by a user or an Earn more's challenges is completed.

MEGA JACKPOT 15483 Satoshi Round ends in Not yet registered? Register to win the MegaJackpot

In Crypto Mining Game, play as a Cryptocurrency Miner in an Original Crypto-Universe!! Mine for game your favorite Crypto-currencies (will never use cpu), do mission to earn Hpower and Ingame Stuff, Collect Original Cards and play with it to Crypto-related Mini-games! 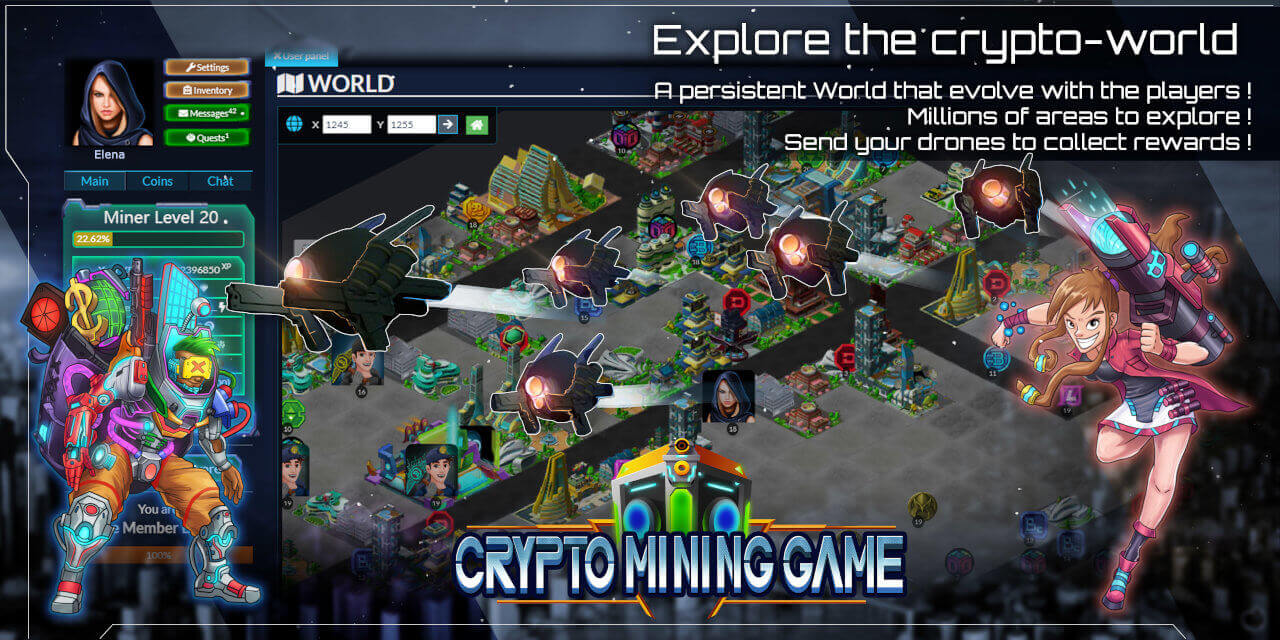 Exchange your coins at best rate, which change depends on many factors!

Daily bonus, lottery, Mini-games, So many fun features to discover!

PLAY NOW!
Advertise in this spot

Hi Players! Here you can check some Balance update that will be performed for next season of Crypto Mining War of 5th, January 2020

Good and important News about the Crypto Mining War!

Whatever you're involved or not in the Crypto Mining War, this news is made for you!

Here's a quick update! Know more about Crystal and CryptoCoinz Vault! Players with no deck can be attacked IF they have some Victory Points!

FaucetHub will soon be disabled from CMG. Direct to Wallet withdraw method will be added at first.

Bitcoin is a payment system and worldwide cryptocurrency. The bitcoin system works without a central repository or single administrator like a bank, so it's called "decentralized digital currency". Bitcoin has been invented by a supposed person named "Satoshi Nakamoto", who might be real, or not! It has been released as open-source software in January 3, 2009.

The smallest amount of bitcoin is 0.00000001 bitcoin, one hundred millionth of a bitcoin. It's named satoshi. Satoshi is generally the unit used in faucet to reward users againsts some advertising views.

So LiteCoin and Dogecoin?

LiteCoin and Dogecoin are what we call "Altcoin". It's some other cryptocurrencies which has been inspired by bitcoin and can be apparent to an ALTernative to it. These two ones are part of the most known and used in world in faucet and many other things.

In addition, we know many other cryptocurrencies, like, for examples, Ethereum, Dashcoin, Bitcoin Cash, Peercoin, Primecoin, etc. There is more than a thousand different cryptocurrencies right now!

A faucet is a website where users can claim cryptocurrencies against some advertising views. It's a good way to know more about cryptocurrencies and start making some money with it. That's why you can see Advertising and Shorten link in its, that this is why faucets are able to exist and give some coin to the user.

CRYPTO MINING GAME use this economic system. We try to make it the less intrusive for you. Don't hesitate to send us feedback through our facebook if you think it can be improved to give you a better user experience!