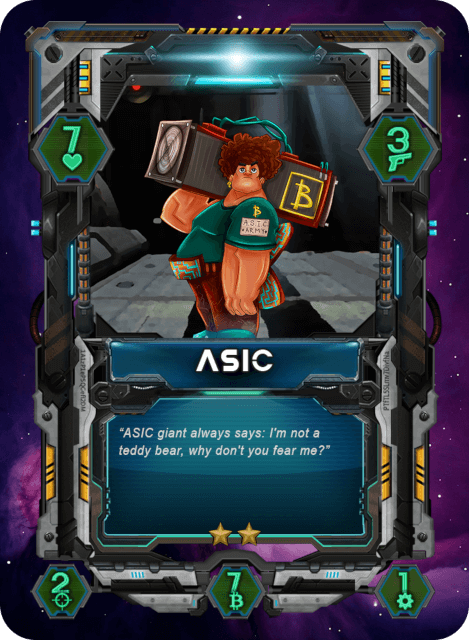 The ASIC Giant is a big humain like guy with an ASIC in his shoulder! He move very slowly, but the Fire of his ASIC-Gun will destroy all the buildings!

The ASIC is a big human-like guy with an ASIC in his shoulder! He moves very slowly but the fire of his ASIC-Gun will destroy all the buildings!

He tried to go to school but he wouldn’t fit into any classroom so he had to study by himself. After his first experiments with an arduino dog, he started messing about on the circuits, he was fascinated. He kept studying and breaking any toy he could get his hands on.

We have to point out that despite his height, the ASIC guy is very… cute. Everything about him shouts cuteness; from his tender skin, to his eyes and even his hands. And he does not like this.

After several toys were destroyed and some explosions burnt part of his house, he finally understood blockchain and hashes; so hashing algorithms are a cryptographic hash function that maps data of random size to a hash of a specific size! Easy-peasy!

With this, he created the biggest, most powerful ASIC in the world, and with it, he doesn’t only mine any crypto in the world, but can also shoot algorithmic beams that will turn you into hashes!

The ASIC Giant is always saying: “I’m not a teddy bear, why don’t you fear me?”

Knows how to follow questions, opening doors with his head and tuning any radio station in the world through his ASIC.

Basic Attention Token (BAT) because it is a very well thought marketing market where you use the basic attention to really focus on the customers you want to reach, probably a good competition against Google or Facebook.

“I don't sleep a lot, I just sleep slow”

The ASIC or Application-Specific Integrated Circuit is basically a chip encoded computer designed for a specific purpose; either analyze Machine Learning for one purpose, or face-recognition or even a cryptocoin specific miner.

The application-specific integrated circuits are chips fabricated using metal-oxide-semiconductor, or MOS as they are mostly known. Although this would not be possible thanks to advancements in technology because nowadays this type of hardware has shrunk from occupying a whole house, to basically just a brick-sized piece of metal with a silicon chip.

These devices are prefered over regular computers to mine crypto currencies because, as its name says, they are application specific, thus driving power and performance with its miniature size and power supply.

Some of the ASICs have built in an IP protection service so that wherever it is connected, you will not be having any type of viruses, bugs or even DDoS attacks.

Some of the most known ASIC miners are all the Bitman Antminers in their S or T versions, as well as the AvalonMiners.

A few people in the world might own one or two ASICs but there are thousands of warehouses around the world filled to the top with ASIC miners generating and generating crypto coins.